MAKING MICRO-OPTICS IN ONE STEP. Whereas traditionally the manufacture of optical components was carried out through a laborious – and often inefficient – milling technique, modern 3D printing methods have boosted the speed and flexibility of the process. By adding layers of a cured resin until a shape is complete, developers are able to start small and build up to the design they need, as opposed to cutting away from larger blocks, resulting in mostly wasted material. Digital technology is enabling this production on demand, with no minimum order necessary.

Thanks to modern methods, producers of optical components have at their disposal processes such as two-photon polymerization, which can produce smooth micro-optics in one fabrication step, and two-photon grayscale lithography, wherein 3D printing allows for the simultaneous production of components with multiple diffractive properties. A hybrid approach that combines 3D printing with casting can also result in the generation of custom components. 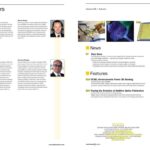 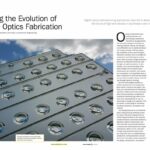 In the cover story of EuroPhotonics, Marco de Visser points out that these fundamental changes in the construction of optical components have benefited the automotive, aerospace, and medical industries, to name a few. And direct laser writing technology now allows for the swift adjustment of specifications while not sacrificing the precision that these industries demand.

You can read the full publication in the digital magazine as published on the EuroPhotonics website.

The 3D Printing Revolution: From Hunting to Growing

The 3D Printing Revolution: From Hunting to Growing